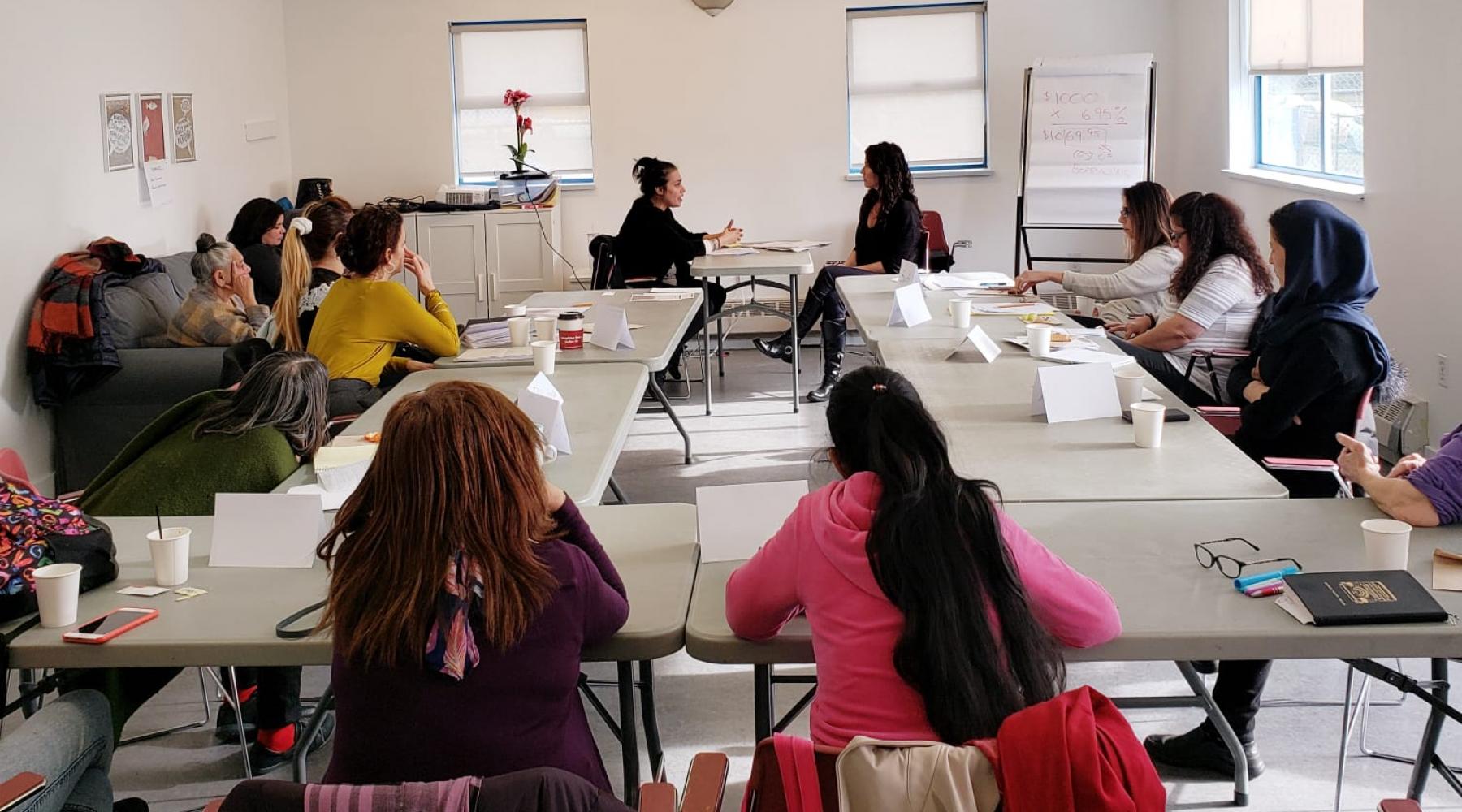 Hamsa Jaser has a new dream that feels like hope: A cozy family restaurant that brings “a small part of her home country to her new home” in Richmond, with a few traditional Iraqi dishes such as quozi, lamb shank with traditional herbs and spices, served like home with starters, complimentary soup and a sauce.

Her dream found a guide with Bridging Settlement and Economic Security, a pilot project fostering entrepreneurship skills for immigrant and refugee women, hosted by East Vancouver’s Kiwassa Neighbourhood House. She joined 13 other women from China, India, Latin America and the Middle East for training on business rules, marketing and financing options, while enjoying the opportunity to forge a supportive network with women in a similar position to herself.

“It was really empowering to feel you’re not alone in this struggle,” Hamsa says, “that there’s other people also in this position. We’re all women trying to open our own things...to find our way.”

The brainchild of three women from the Women’s Economic Council and Kiwassa Neighbourhood House, the project was created to address what they saw as a systemic flaw with immigrant services for women in Canada.

“Programs tend to focus on training women to become employed and how to hone a resume,” says Serah Gazali, the project coordinator. “These are very important skills but the job market is not always there to absorb the women.”

The project received a $5,000 grant from the Margaret Mitchell Fund for Women, held at the Foundation. When the former Member of Parliament passed away on International Women’s Day in 2017 at age 92, her legacy lived on. First established in 1998, her Fund continues to provide financial support to programs that further economic and social justice for women in her former riding of Vancouver East.

“Margaret would have loved to have seen how these young women came to Canada as refugees or immigrants trying to better themselves by starting businesses.”

PATSY GEORGE, ADVISOR TO THE MARGARET MITCHELL FUND FOR WOMEN

For the project, Serah joined forces with Melanie Conn, president of the Women’s Economic Council, an organization that fosters women-centered community economic development and Gulalai Habib, director of settlement and employment programs at Kiwassa, also on the Council’s board. The Council also provided $3,500 in funding while Kiwassa contributed meeting space, transportation, child-minding and refreshments for the women.

“Many immigrant women already come with entrepreneurial skills,” says Melanie. “They’ve operated a micro-business in their home country and they just want to do something like that here.”

Collectively, participants had operated jewelry and sewing businesses, were accountants, lawyers and tour guides. Hamsa, who is married and has four children, was a journalist for CNN in Iraq and ran a mobile phone business in Dubai, but found it challenging to get started in Canada. The program provided what she calls a lynchpin to help her understand the rules and regulations and the next steps forward.

“Margaret would have loved to have seen how these young women came to Canada as refugees or immigrants trying to better themselves by starting businesses,” says Patsy George, who was a long-time friend of the renowned feminist and now serves as an advisor to the Margaret Mitchell Fund for Women. “This is the kind of dream that she had as parliamentarian and a community resident of East Vancouver. She would be delighted to see that her Fund is really and truly working at the local level.”

Part of Vancity Community Foundation’s role is connecting fund advisors like Patsy to projects that embody the legacy of their Fund. When Melanie first approached them for funding, the Foundation team saw a natural alignment with the vision of the Margaret Mitchell Fund. Coincidentally, Melanie had previously worked with Margaret many years before. In 1972, the two travelled to China to mark the country’s first celebration of International Women’s Day and to meet women who were working in communities there.

“When Vancity Community Foundation said the Margaret Mitchell Fund would be a good source of support for this project, it felt like I was still working with her,” says Melanie, “that we were still doing the same kind of things together even though she had passed on.”Based on the pilot project’s success, they are seeking funding from Immigration, Refugees and Citizenship Canada to roll out the approach on a larger scale in BC, Ontario and Newfoundland.

Serah says she hears the difference in the tone of the women’s voices.“When I talk to these women, I see a dramatic change in the way they look at their life here. I see hope. And that is the most important thing that you can givea person who is struggling with their life here.”