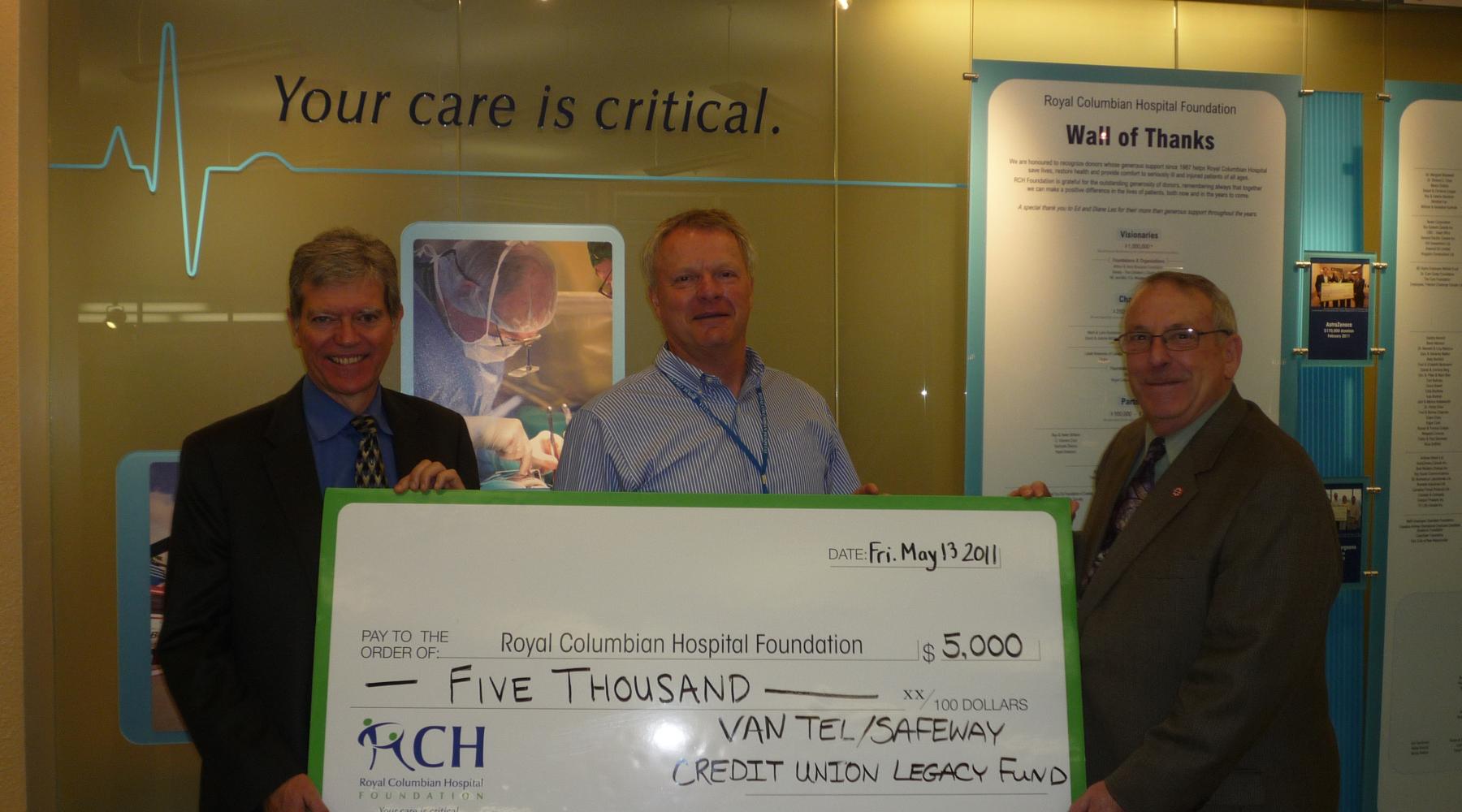 From small gifts to an enduring legacy

Today, the Fund has grown to $5.3 million, and is still giving back to communities all across BC.

"The Fund exemplifies the essence of what a credit union is about ‒ helping its members and communities," says Greg Ryan, a marketing employee who represented Pacific Newspaper Group (Vancouver Sun and The Province) on the Van Tel/Safeway Credit Union Legacy Fund board for many years. "In 1978-79, we had an eight-month strike involving eight separate unions within the company. The credit union helped people out and made sure we got through it."'

Inspire members to do good works

The early grants were touching and tangible. A $2,500 grant helped Victoria telephone operator Lavone Craven and her husband Lyle Scroggs launch Bicycles 4 Kids in 2000. "They worked throughout the year to raise money to buy bicycles from a local bike shop and parts for reconditioning all the old bikes they could find," recalls Karen. "On Christmas Eve, each bike, along with a helmet and bike lock, was personally delivered to the children who had never had the opportunity to own a bicycle."

Small gifts gave back to the community tenfold.

"We wanted the grassroots programs, with small but ingenious ideas," says Greg. "That was most rewarding to me when it was clear the grant would help get these things off the ground. "Over the next four years, Bicycles 4 Kids received three more grants worth $4,500, which meant hundreds of bicycles for children who needed them.

The price of a pony

Another early grant funded a pony for the North Island Therapeutic Riding Association, that went on to give the experience of riding to hundreds of children with disabilities. "It felt significant to fund a pony that would be used for many years by a small charity to help so many," says Karen.

But times were changing. In 2002, the Van Tel and Safeway credit unions sought strength in numbers, merging into Van Tel/Safeway Credit Union. The foundation became the Van Tel/Safeway Credit Union Foundation, bringing new Board members, which included Safeway employee Kelly Jones. Two years later, it merged again with Pacific Paper Industry Credit Union, bringing Greg onto the board. Derek Lee, the regional pharmacy manager for Safeway, joined around this time as well. Once Greg, Derek and Kelly began giving grants to the community they became "lifers" like Karen and Michael, finding the grantmaking process far too rewarding to stop.

The foundation gave grants large and small, far and wide, all around the province with immeasurable impact. They funded ropes and gear for North Shore Search and Rescue, and Arrowsmith Search and Rescue in Coombs, and tents for Guides and Scouts camps. When seniors were struggling to enter a small low-income housing project in Fruitvale, they funded cement entryway and sidewalk repairs. At Pacific Treatment Centre for addictions, a grant funded window blinds and building improvements.

With the 2007 Vancity Credit Union merger, the foundation became the Van Tel/Safeway Credit Union Legacy Fund and found a home at the Vancity Community Foundation.

Support went out to various hospital foundations for everything from blanket warmers to a neonatal intensive care unit incubator to EKG machines. In 2011, a $5,000 grant went towards a ventilator for Royal Columbian Hospital. “That ventilator is now on the frontline of our care of COVID-19 patients," says Jeff Norris, Royal Columbian Hospital Foundation President and CEO. "The grant made a decade ago is a striking example of how the impact on patient care continues years later.”   (Note: The lead image features  (left) Greg Ryan, president, and (right) Michael Wright, director of the Van Tel/Safeway Credit Union Legacy Fund presenting Gordon Stewart from the Royal Columbian Hospital Foundation, with a cheque for $5,000 for the All-In-One Ventilator for RCH’s Intensive Care Unit).

From Habitat for Humanity to hot lunches for children and seniors, from crisis intervention to crisis prevention, from environmental programs to First Nations and so much more, the Legacy Fund has done it all and keeps on giving.

The Fund continues to benefit community to this day, focusing on supporting vulnerable youth and seniors since 2018, as well as affordable housing, a strategic funding priority of Vancity Community Foundation.

"Access and availability of safe, secure and affordable housing is one of the most significant issues in our community," says Allison Felker, Interim Executive Director of Vancity Foundation. "Van Tel/Safeway Credit Union Legacy Fund’s support is in keeping with the spirit of credit unions caring for their communities."

After many years of giving back to their community, Karen, Derek, Greg and Michael worked with staff at Vancity Community Foundation through-out 2020 to plan carefully for their succession. Beginning in 2021, staff at the Foundation will oversee the grant making while continuing to advise the committee of the Fund’s activity – ensuring a lasting legacy of community support.

The universe opens up

The legacy keeps on giving in remarkable ways. "It felt like the universe lining up for me," says Douglas College student Madison Stewart on receiving a $1,000 bursary this spring from the Legacy Fund, which has supported students in the College's Youth Justice Worker program since 2007. Having lost her job due to the COVID-19 pandemic, she took that big leap into education, even though finding daycare for her four-year-old son was a challenge. She had been thinking: "Should I even go to school over the summer? Or should I just work instead? This bursary lets me relax and study, and takes away some stress."

The Writers' Exchange, a literacy program that leads inner-city children in Vancouver through the process of producing a professionally published book with titles of their choosing such as Big Fat Jobs and Deez Dough Nuts, has also received support. "We help children see they can be successful, and when they see how reading and writing is fun that leads to greater engagement at school," says Managing Director Annastasia Forst.

When the pandemic hit last year, the Fund pivoted to address emerging needs, dedicating the entire Spring granting budget towards COVID-19 emergency response ‒ a decision that underscores their commitment to meeting the needs of their community. The funding went to social service providers like Aunt Leah's Independent Lifeskills Society, Seniors Services Society of BC, the Carnegie Community Centre Association Chinatown Concern Group and BC Society of Transition Houses, on the frontlines of pandemic response.

Looking back over more than 20 years of giving grants, Karen says that "reviewing applications really opened my eyes to the kind of issues people are facing in this province, and being able to help was so personally gratifying. The impact was so much bigger than I expected."

Since 2007 alone, the Van Tel/Safeway Legacy Fund has granted more than $1.5 million back to the community. But that is just dollars. The magnitude of the real gift is much larger, as it lives on in the lives of every person touched by the hundreds of organizations that received funding, and in all the future grants to come, built on the 60-year history of these credit unions and the goodwill of thousands of their members.